In this month’s Retro we celebrate the immense talent of Ginger Rogers and allow her to dance her way out of the shadow of Fred Astaire. We uncover more fascinating stories, such as the daring midnight raid made by Charlie Chaplin’s wife to rescue the family’s fortune and meet the colourful character behind the Carry On films.

As Oscar season is upon us, we look back to some of the iconic firsts from the Academy’s archives.  While, for cult TV and sci-fi fans we look back at Gerry Anderson’s Joe 90 and, if you’ve ever wondered how the props and sets of Star Wars were made, we have the answer.

We also go behind the scenes of Hollywood’s first monster movie – King Kong – to reveal how the great ape was bought to life on screen. Plus – don’t miss – the scandal of Mary Astor’s ‘purple’ diaries, Warren Beatty and Leslie Caron’s ill-fated romance, and the lasting friendship between Clint Eastwood and director Don Siegel. 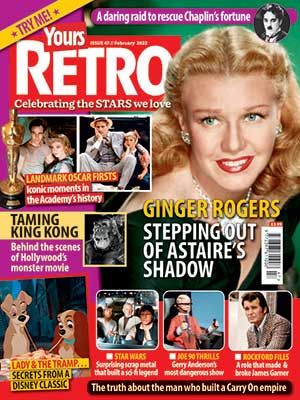 About Yours Retro Magazine

Yours Retro is utterly unique and a must-read for anyone who loves the stars from the past. Through evocative images and well-researched features, you can enjoy reliving your youth and learn interesting snippets about your favourite stars. Featuring home-grown talent and Hollywood legends, alongside TV favourites and music stars - we look back fondly at their lives and loves, celebrate their talent and reveal some of their secrets.

As a Yours Retro magazine subscriber you'll: 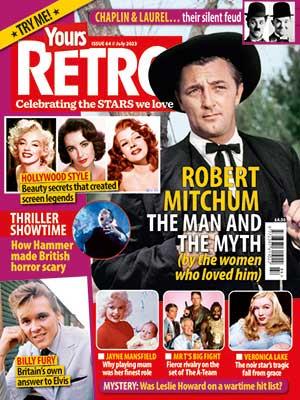