It’s four years since James Gunn’s last big, splashy, colourful comic book blockbuster – and the world’s been a duller place during the wait. No more. Gunn is back, touching down to Earth after the cosmic chaos of the Guardians Of The Galaxy movies to bring his magic touch to DC with The Suicide Squad – a crazy, raucous, violent villain team-up ready to wipe clean the memory of the 2016 film with a cast of crazier characters (Polka-Dot Man and rodent-human hybrid Weasel, anyone?), a giant starfish baddie, and a tone inspired by ‘70s men-on-a-mission war movies. Gunn, it’s good to have you back.

This month’s issue of Empire brings James Gunn’s new Squad to five collectible magazine covers – and inside we speak to the filmmaker, his cast (including a returning Margot Robbie, Idris Elba, John Cena, Steve Agee, Peter Capaldi, Daniela Melchior, and David Dastmalchian), producer Peter Safran and more about the making of his maddest movie yet. And that’s just the beginning – we have a whole James Gunn special, with the man himself dispensing his seven key lessons of filmmaking. Plus, we talk to his regular collaborators like brother Sean Gunn, Nathan Fillion, Michael Rooker and Peter Safran, get the world’s first look at The Suicide Squad’s Peacemaker spin-off series, and have an exclusive awesome mix of Gunn-picked tunes that *almost* made it onto The Suicide Squad’s retro soundtrack. And if that wasn’t enough, this month’s issue also comes with an exclusive print from comic book legend Jim Lee – an original piece of The Suicide Squad art.

Elsewhere in the issue we talk to Westworld co-showrunner Lisa Joy about kicking arse in Hollywood and putting together her new movie, sci-fi noir Reminiscence with Hugh Jackman and Rebecca Ferguson. We delve into the inner workings of the  year's most surprising comedy, Limbo, and talk to twist-meister M. Night Shyamalan about his rollercoaster career on the eve of his latest movie, Old.

Meanwhile, Keanu Reeves heads up this issue's Gods Among Us actor showcase (whoah), plus we put musophile auteurs Peter Jackson and Edgar Wright together to talk about their new music documentaries, Get Back and The Sparks Brothers, and even find time to celebrate 20 years of Shrek. Read all that and so much more in the August issue of Empire.

Empire August 2021 - The Suicide Squad: Cover 4
Skip to the end of the images gallery 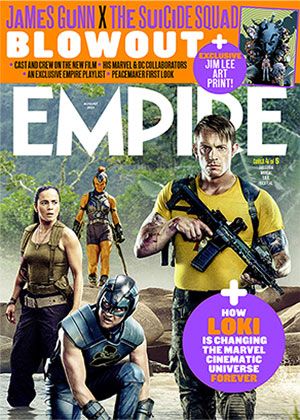