A few years ago, it was impossible to look at a screen big or small and not see Tom Hiddleston somewhere. Between his recurring role as Loki in the Marvel Cinematic Universe, leading the BBC’s hit thriller The Night Manager, and anchoring major movies like Crimson Peak and Kong: Skull Island alongside cult flicks like High-Rise and Only Lovers Left Alive, he became a major star in a flash. But since Thor: Ragnarok, Hiddleston has been largely absent from our screens – beyond fleeting appearances as Loki in Infinity War and Endgame, swapping Hollywood for a return to theatre in London and New York.

Now, in 2021, Tom Hiddleston is well and truly back – with his own Loki Marvel series on Disney+ on the way, and a major role in The Essex Serpent down the line. In a massive world exclusive, Empire caught up with the man behind the mischief for a major new interview – not only giving the first word on Loki, but discussing his ongoing journey with that character, where he’s been for the past few years, looking back on his work with some of the greatest filmmakers around today, and discussing how he gets under the skin of his most iconic roles. It’s a revealing and reflective conversation with one of the most magnetic men in the movie business. Plus, inside you’ll find a brand new world exclusive look at Loki, and a brand new Tom Hiddleston shoot, photographed exclusively for Empire by Steve Schofield – who also shot the cover.

It’s a thrilling return for an actor whose journey in the MCU and beyond is far from over – and you can read all about it in the June issue of Empire.

Empire June 2021
Skip to the end of the images gallery 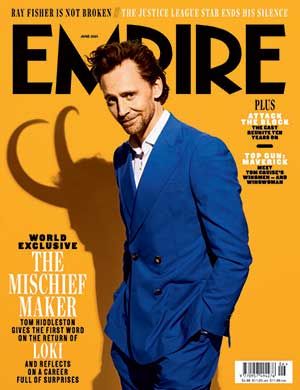