This issue of Q is our last. It’s an Adventures With Legends 1986-2020 special, recounting our most illustrious meetings (and run-ins) with the stars.

We round up some of the greats for our Classic Interviews series, reprinting the features in full. There’s Phil Sutcliffe visiting Joni Mitchell in LA for a rare interview in 1988 to hear about her life, loves and music and Sylvia Patterson’s 2011 cover feature with Adele as the world’s newest superstar got to grips with her newfound fame. There’s two crackers from Adrian Deevoy in the form of a rowdy night on the tiles with The Stone Roses in Sweden just weeks before Spike Island and then his interview-for-the-ages cover story with Prince from 1994. From 1991, there’s Lloyd Bradley’s interview with legendary singer Nina Simone.

Other Classic Interviews capture some of our favourite artists as they embark on exciting new adventures. David Cavanagh’s 2000 feature with Radiohead caught the band at a creative crossroads and Ted Kessler’s riotous 2016 drink-up with Liam Gallagher saw the former Oasis frontman break cover to plot out an as-yet-uncharted solo career. This issue’s Cash For Questions is also a classic which sees Tom Doyle pose questions from the public to Lou Reed from 2000.

In Freeze Frame, we go behind the scenes on iconic pictures from across Q’s history with the photographers who took them. We get the inside story on shots of George Clinton, Perry Farrell, Florence Welch, Pete Townshend and David Crosby. For Meeting People Is Easy, Ted Kessler, Victoria Segal, Simon Goddard, Dorian Lynskey and Niall Doherty recall their most eye-opening encounters.

In the Q Review, there’s the definitive takes on new albums from IDLES, Doves, Biffy Clyro, All We Are, Disclosure and more.

All this and more in the final issue of Q.

Q September 2020
Skip to the end of the images gallery 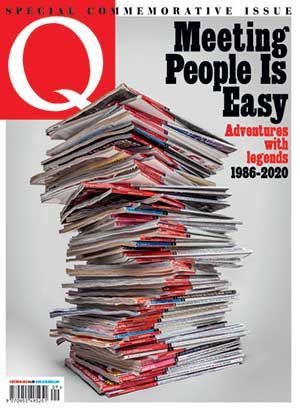