For issue 16 of Planet Rock magazine, we welcome prog rock royalty to the cover, as we salute the mighty Pink Floyd. We’ve an inside look at the making of the band’s 1975 masterpiece Wish You Were Here from Floyd biographer Mark Blake, plus David Fricke presents an exclusive portrait of Roger Waters, as Floyd’s former conceptual mastermind prepares to bring his astonishing Us + Them tour film to cinema screens worldwide.

In addition, guitar god Steve Vai selects the songs which inspired his journey in rock’n’roll, we’ve nominated Out Of The Silent Planet from cult Houston heavyweights King’s X as our Classic Album, we’ve a frolic in the park with The Rolling Stones in our Eyewitness feature, and we present Access All Areas coverage of this summer’s Ramblin’ Man Fair and Steelhouse festivals.

Look out too for reviews of new albums from Alter Bridge, Kris Barras Band, Tool, Whiskey Myers, Black Star Riders, Slipknot and more, plus we salute a lesser-heralded treasure by The Who and take a deep dive into Metallica’s controversial catalogue for our Buyers’ Guide.

All this, plus The Cult, Jimi Hendrix, Feeder, Steel Panther, Alice Cooper, Rammstein and more…

Buy a single issue today, or better, still, take out a Subscription - Find out more here! 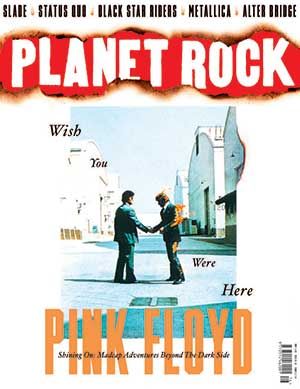