To kick off 2019, we exclusively welcome The World’s Greatest Rock ’n’ Roll Band to the cover of issue 12 of Planet Rock magazine.

The Rolling Stones always revelled in their reputation as the bad boys of British pop music. As hippy dreams of peace and love gave way to the Vietnam war, political assassinations and riots in the streets in the late 1960s, the Stones stoked the flames of discontent with an unholy trinity of albums chronicling illicit sex, drug abuse, apocalyptic violence and moral decay. Via exclusive interviews with Mick Jagger and Keith Richards we revisit their darkest hours...

We’ve the only Access All Areas report from Planet Rockstock, live reviews from Def Leppard and Black Stone Cherry’s UK arena tours, and the definitive reviews of new music from Rival Sons, Inglorious, Thunder, Reef, Cats In Space and more.

All this, plus Greta Van Fleet, Magnum, Fleetwood Mac, Cormac Neeson, Metallica... and your chance to win a crate of Planet Rock’s brand new Skull Rocker beer!
Planet Rock issue 12
Skip to the end of the images gallery 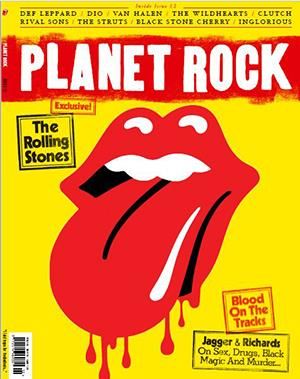