MOJO: The Collectors’ Series: The Clash

MOJO is thrilled to present the first of two deluxe bookazines, bringing together its finest writing on The Clash and the Sex Pistols.

In 1976, punk rock exploded in Britain, sparked by the emergence of two iconic new groups: the Sex Pistols and The Clash. Over the next two years, their electrifying sound, look and attitude would transform music and bring a vital new energy and swagger to popular culture – with plenty of riots, arrests, bust-ups and drug issues along the way. But while the Pistols would crash and burn after their incendiary Never Mind The Bollocks album, The Clash would go on to develop their sound on 1979’s London Calling LP and beyond, eventually incorporating reggae, ska, dub and hip hop into their grooves until their rancorous split in 1985.

This first issue of Punk Icons unfolds the story of The Clash, from Mick Jones and Paul Simonon poaching Joe Strummer from pub rockers The 101’ers to form the group, to the chaos and destruction of their 1977 White Riot tour; and thereon from the controversial visits to America that inspired the London Calling, Sandinista! and Combat Rock albums, to the dramatic dismissal of first drummer Topper Headon in 1982, and then Jones the following year. In between you’ll find rucks, riots, ripping tunes and a devotion to all things reggae, as The Clash earned their reputation as rock’s ultimate rebels.

THE CLASH is available from December 23, 2021 and comes in a special gatefold wallet with space to accommodate the follow-up issue on the SEX PISTOLS.

Read more
MOJO: The Collectors’ Series: The Clash
Skip to the end of the images gallery 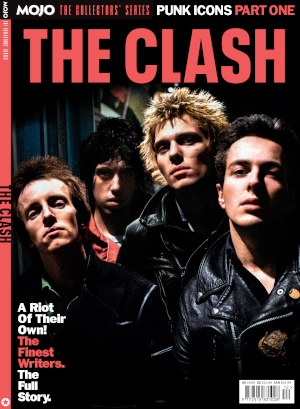