Thirty years ago, Oasis played their first-ever gig, the beginning of an extraordinary journey that saw the Manchester five-piece become the biggest British rock band in a generation and brothers Noel and Liam Gallagher two of the most iconic figures in music history. To celebrate three decades of Gallagher genius and mayhem, MOJO has corralled its finest writing on Oasis and the brothers’ solo careers into two lavish 132-page bookazines, packed with rare and famous photographs and lashings of rambunctious rock’n’roll tales.

This first issue, WHAT’S THE STORY 1991-1998, follows the band from their early days in Manchester and signing to Creation Records, through to the making of their epochal first two albums, Definitely Maybe and (What’s The Story) Morning Glory?, to their momentous shows at Knebworth Park in 1996 and the last record made with the classic ’90s line-up, Be Here Now, by which time tensions within the group were at breaking point.

Among the essential features and interviews you’ll find inside the magazine’s stylish covers are MOJO’s first encounter with Noel not long after Definitely Maybe’s mercurial success in autumn 1994, the inside story of the sensational punch-up between Noel and Liam during the recording of Morning Glory, and material from a shelved 1997 documentary that the band refused to be shown to the public.

OASIS WHAT’S THE STORY 1999-2021, available from March 4, 2021, brings Noel and Liam’s ever-compelling story up to date, beginning with the dramatic departure of founder members Bonehead and Guigs during the recording sessions for 2000’s Standing On The Shoulder Of Giants album, and thereafter following Oasis through their millennial triumphs as an international stadium act, the bust-up in Paris that finally ended the group, and Noel and Liam’s successful solo careers and eternal brotherly spats.

Mojo: The Collectors Series: Oasis Bundle
Skip to the end of the images gallery 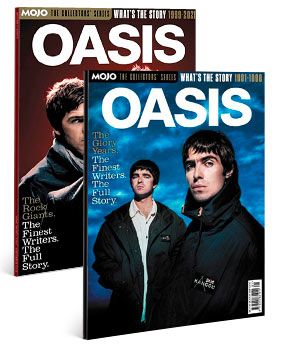