MOJO is thrilled to present the second of two deluxe bookazines, bringing together its finest writing on Neil Young.

Delving into MOJO’s 25-year trove of exclusive interviews, in-depth features and buyers’ guides, this lavish 132-page magazine celebrates the later phases of folk-rock icon Neil Young’s extraordinary career, beginning with his critical resurgence at the end of the 1970s with the magnificent Rust Never Sleeps album, and winding up four decades later with the story behind his last studio record, Colorado, made with legendary backing band Crazy Horse. In between, MOJO writers Sylvie Simmons and Nick Kent profile Young’s ‘difficult’ ’80s and rambunctious comeback as the Godfather of Grunge in the ’90s, while Simmons, Tom Doyle and Keith Cameron bring the story up to date via fascinating interviews with the singer conducted in the past decade or so, when Young’s uncompromising attitude and peerless songwriting continue to inspire.

You’ll also find a survey of Young’s greatest songs and studio albums from this period of his career, dozens of iconic and rare photographs, plus much more besides!

Mojo: The Collectors Series: Neil Young Part 2
Skip to the end of the images gallery 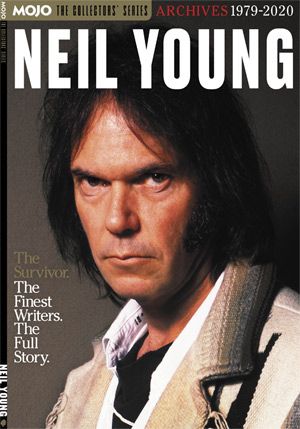