Order MOJO The Collectors’ Series JOHN LENNON and PAUL McCARTNEY for a discounted price of £14.99.

As the songwriting partnership behind The Beatles, in the 1960s John Lennon and Paul McCartney changed the language of pop music – and in doing so transformed the world that so eagerly embraced their magical and timeless songs. Later, John and Paul would reveal their very different personalities and approaches to their art through their solo careers – in Lennon’s case, one cut tragically short when his life was taken by a deranged fan outside his New York home in 1980. To celebrate these two musical giants, MOJO has brought together its finest writing on Lennon and McCartney in two lavish 132-page bookazines, packed with exclusive interviews, insightful features, and iconic and rarely seen images.

This first issue salutes John Lennon, the elder of the pair and the man viewed as music’s ultimate rebel. It begins with his teenage years as a quick-tempered rock’n’roller in Liverpool, then journeys through his time as The Beatles’ outspoken ‘leader’ during their mid-’60s heyday, to his adventures in revolutionary politics with wife Yoko Ono in the early ’70s that led to a campaign to deport him from the United States. Even his five-year reclusion as a ‘house husband’ in late ’70s New York proved to be full of unexpected drama and emotional complexity, eventually inspiring the superlative, mature songcraft of 1980’s Double Fantasy album.

Among the fascinating features and interviews you’ll find inside the magazine’s covers are an account of his art school days and the early Beatles by his friend Bill Harry, a look at how marijuana and LSD changed his songwriting, the story of his infamous 18-month mid-’70s bender dubbed the ‘Lost Weekend’, and an examination of the impact of his death on The Beatles’ legacy.

JOHN LENNON comes in a special gatefold wallet with space to accommodate the follow-up issue on PAUL McCARTNEY.

MOJO The Collectors’ Series: LENNON & McCARTNEY – Part 2 PAUL McCARTNEY turns the spotlight on the younger of the pair’s eventful life and gift for pop genius, following Paul’s journey from humble Liverpudlian roots to his millennial status as one of music’s all-time greats, via his exhilarating and turbulent days as a Beatle, his creative ’70s rebirth in Wings, drug busts, dramas and some of the finest pop songs ever written.

Mojo: The Collectors Series: Lennon & McCartney Bundle
Skip to the end of the images gallery 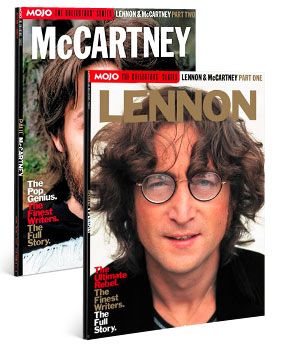