Sixty years ago, The Beatles embarked on a journey that would not only change forever the way music sounded but also symbolise the positive energy and youthful idealism that transformed the world in the 1960s. From playing raw rock’n’roll in Liverpool’s Cavern Club to conquering America and elevating rock music into a serious artform with *Sgt. Pepper and *The White Album, the Fab Four were constantly evolving as musicians and songwriters – and also as people. As the ’60s unfolded, John, Paul, George and Ringo would expand their minds via pioneering explorations of Eastern spirituality, avant-garde art, psychedelic drugs, politics and fashion, their interests powerfully enriching arguably the greatest body of pop and rock music ever created.

Featuring 260 pages of fascinating features and interviews, and illustrated with dozens of iconic and rare images, THE BEATLES RED & BLUE 1962-1970 brings together MOJO’s much-prized RED 1962-1966 and BLUE 1967-1970 bookazines into one sumptuous, single-volume Deluxe Anthology Edition. Within its heavy card covers, the group’s story is unfolded with the unrivalled knowledge and passion of MOJO’s finest writers, while readers are also guided through The Beatles’ key albums and songs.

THE BEATLES RED & BLUE 1962-1970 is a must-have for all fans of the Fabs, old and new, and makes the perfect gift for the festive season. Copies are available online here and in UK shops from December 10, 2020.

Pre-order your copy today. Pre-orders will be dispatched on the 16th December!*

Mojo: The Collectors Series: The Beatles Deluxe Anthology Edition
Skip to the end of the images gallery 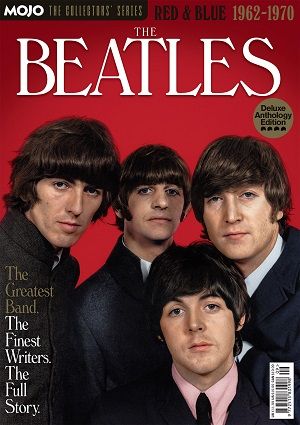