When David Bowie died in January 2016, his loss to music was incalculable. For nearly 50 years, the singer and sometime actor had repeatedly re-shaped the landscape of rock and pop, from mixing science-fiction and folk-rock on his captivating 1969 hit Space Oddity, to inventing glam-rock high priest Ziggy Stardust in 1972, pioneering electronic music on 1977’s ‘Low’, and conquering the globe with the polished ’80s funk of ‘Let’s Dance’. Even in the week of his death, he stunned and thrilled critics with the breath-taking originality of his swansong album, the amazing ‘Blackstar’.
To celebrate Bowie’s extraordinary life and music, MOJO is bringing together its finest writing on the singer in two deluxe special editions, Bowie One 1947-1975 and Bowie Two 1976-2016, covering the early and later periods of his work, respectively.
Bowie One, begins with the story of his childhood in South London and ends with the story of 1975’s ‘Station To Station’, the last album he made during the height of his adventures in drug-minded creativity. In between are fascinating features on his ’60s mod era, the making of his first great album, 1971’s ‘Hunky Dory’, his dramatic transformation into Ziggy Stardust in 1972, the love affair with contemporary American soul music that inspired ‘Young Americans’ in 1975, and the story behind his appearance in Nic Roeg’s iconic cult sci-fi film, The Man Who Fell To Earth.
These stories are brought to you by our team of star writers and Bowie experts including Charles Shaar Murray, Nick Kent, Paul Trynka, Kris Needs, Paul Du Noyer and Mark Paytress.
All this, plus scores of amazing iconic, rare and unseen photographs too!

Bowie One will come in a special gatefold sleeve, with space to accommodate Bowie Two, which will follow on December 28.

Mojo: The Collectors Series: BOWIE CHANGES 1947-1975
Skip to the end of the images gallery 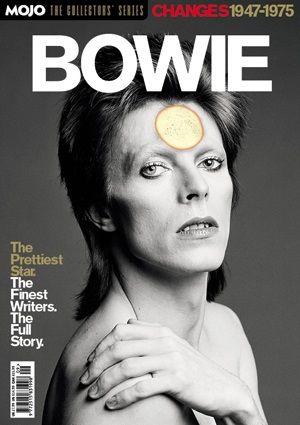