Ryan Gosling as a renegade hitman. Chris Evans in relentless, sociopathic villain mode. The directors and writers of Avengers: Infinity War and Endgame. Netflix’s biggest blockbuster yet. Get ready for The Gray Man, this summer’s most explosive action movie – a breathless cat-and-mouse thriller from the Russo Brothers, back in bullet-strewn, pulse-pounding territory after laying waste to the box office with their epic run of Marvel movies. The chase is on.

The new issue of Empire takes a world-exclusive dive into the Russos’ star-studded spy spectacular, getting the full story on its propulsive plot, its A-list ensemble (Gosling! Evans! Ana de Armas! Billy Bob Thornton! Regé-Jean Page!), and its potential to kick off an expansive new espionage saga. Inside, we speak to Ryan Gosling about taking on his first major screen role in years, playing cornered assassin Courtland Gentry (aka Sierra Six) as he’s forced to go on the run; Chris Evans talks leaving Captain America behind to play the gleefully sadistic Lloyd Hansen, the unstoppable enemy hunting down our hero; and the Russos discuss their mission to make a non-stop action-adventure that deconstructs and rebuilds the spy movie in fresh and surprising ways. Plus, we have brand new interviews with other cast and crew, and tons of never-before-seen images from the film.

And that’s not all – The Gray Man kicks off our huge summer preview, packed with major exclusives from the most exciting cinematic and small-screen treats coming your way in the next few months. We talk Thor: Love And Thunder with Taika Waititi, get all shook up with Elvis, blast off with Lightyear, feel the Force with Ewan McGregor in a major new Obi-Wan Kenobi interview, power up with Ms. Marvel as Kamala Khan finally enters the MCU, return to Middle-earth with The Lord Of The Rings: The Rings Of Power, and delve back into the belly of Baltimore in David Simon’s We Own This City. It’s a stacked issue, packed with unmissable access to the summer’s biggest and best adventures. Bring on the summer!

Empire Summer 2022
Skip to the end of the images gallery 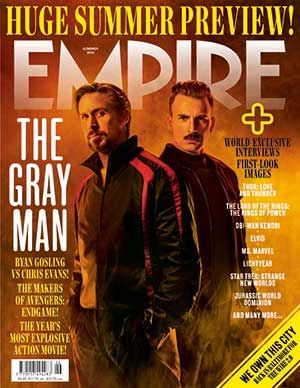