It’s finally time for some new blood to enter the Marvel Cinematic Universe. With Avengers: Endgame, the MCU tied up a decade-plus of storytelling, and bid farewell to several of its biggest characters – and while the likes of WandaVision, The Falcon And The Winter Soldier, Loki and Black Widow have taken beloved heroes in thrilling new directions, Phase 4 is finally about to introduce an all-new character who occupies his own place in Marvel’s epic playground. Step up, Shang-Chi – master of the martial arts, and the long-overdue first Asian-American superhero in the MCU – making his debut in Shang-Chi And The Legend Of The Ten Rings, an action-adventure inspired as much by Jackie Chan films and wuxia epics as your standard comic book fare.

It marks a major breakthrough for star Simu Liu, who you’ll find on the cover of Empire’s brand new issue in his full Shang-Chi regalia, standing alongside Awkwafina’s Katy, and Meng’er Zhang’s Xialing. And in our epic cover feature you’ll find brand new interviews with all three of them, as well as director Destin Daniel Cretton and Marvel boss Kevin Feige, illuminating the character’s long journey to the screen, the importance and responsibility of providing much-needed East Asian representation in the MCU, and exploring how Liu seemingly manifested his own Marvel destiny. All that, and we have brand new exclusive images and insights into a superhero adventure unlike any other.

That’s not the only Marvel goodness in this issue either, with a major interview-packed Loki feature breaking down the series’ biggest moments – including insights from Tom Hiddleston himself. And there’s plenty more inside too – including a massive Cannes report, and a tribute to the legendary, late Richard Donner – in an action-packed Empire that’s not to be missed.

Empire September 2021
Skip to the end of the images gallery 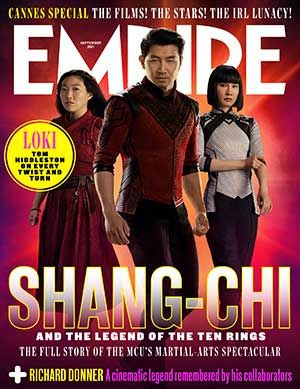