Do you hear that? That stomp, stomp, stomping sound currently rippling water glasses worldwide? It’s the sound of the summer’s biggest movie heading right this way – a gigantic dinosaur adventure 65 million (and 29) years in the making. Get ready for Jurassic World Dominion, the final chapter of the Jurassic World trilogy, and the sixth instalment in the series that brought prehistoric thrills back to life and onto the big screen. This time, it’s not just the dinosaurs and the likes of Chris Pratt and Bryce Dallas Howard who are back – the original Jurassic Park trio of Sam Neill, Laura Dern and Jeff Goldblum are reunited and along for the ride too in a Jurassic adventure like no other. Hold onto your butts.

In a major world-exclusive, the new issue of Empire presents the ultimate access to Jurassic World Dominion, with an epic 12-page spectacular on the film. We have brand new, never-before-seen dinosaurs. We have fresh interviews with the filmmakers and cast, including the World gang and the legendary Park OGs. We have incredible tales witnessed on the film’s sprawling set. We have tons of images that give your very best look yet at the carnage that comes from unleashing dinosaurs into the present day. And, we have two sensational newsstand covers packed with star power and scaly beasts, shot exclusively for Empire by Art Streiber.

All that, and this issue also includes a major new look at Top Gun: Maverick with Tom Cruise as it heads for the runway once more – plus, we get a first look at Brad Pitt’s all-out actioner Bullet Train, delve into the ultimate Nicolas Cage movie in The Unbearable Weight Of Massive Talent, and much, much more.

On the first of our two collectible Jurassic World Dominion covers, we have the Legacy Heroes – aka Jeff Goldblum’s Ian Malcolm, Sam Neill’s Alan Grant, and Laura Dern’s Ellie Sattler, joined by the Dilophosaurus, a baby Nasutoceratops, and the Pyroraptor. On the second, we have the New Breed – aka Mamoudou Athie as Ramsay Cole, Bryce Dallas Howard as Claire Dearing, Chris Pratt as Owen Grady, and DeWanda Wise as Kayla Watts, flanked by returning Velociraptor Blue, and her adorable offspring Beta.

Empire June 2022: Cover 2
Skip to the end of the images gallery 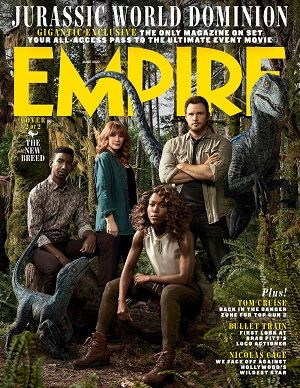