What happens when you take the most iconic comic book character of all time, entrust him to one of Hollywood’s most ambitious directors, and cast a leading actor who reinvented himself from teen idol to screen powerhouse? You get *The Batman* – a bold, breathtaking new take on a hero you might have thought you already knew inside out. Well, just you wait. Director Matt Reeves and star Robert Pattinson are cooking up something special with their dark, dangerous, detective-centred Bat-flick – a noir-ish, horror-tinged serial killer mystery with a grunge-rock flair. Think you know The Batman? Think again.

This month’s issue of *Empire* features the world-exclusive full story on the Dark Knight’s radical return – taking a deep-dive with Reeves, producer Dylan Clark, and their stellar cast on their road into Gotham, their very different conception of Bruce Wayne, the Zodiac Killer-inspired reinvention of the Riddler, and the unexpected influences that make for a Batman story unlike any that’s hit the silver screen before. Inside the mag, you’ll find brand new interviews with Reeves, Clark and Pattinson, as well as Zoë Kravitz on Catwoman, Paul Dano on The Riddler, Colin Farrell on The Penguin – plus, plenty of brand-new never-before-seen images from the film. Light up the Bat-Signal: Gotham’s caped crusader is back.

Also inside the issue, you’ll find our epic 2022 preview – featuring brand new looks at *Avatar 2*, *Jurassic World Dominion*, Pixar’s *Lightyear*, and many many more, plus Guillermo del Toro writing exclusively for *Empire* about the creation of *Nightmare Alley*.

This month we have two collectible newsstand covers – one starring Robert Pattinson’s Batman, standing tall in the brand new Batsuit; the other featuring Zoë Kravitz’s Catwoman – claws out, whip in hand, and ready to cause trouble. Click here to view Cover 1.

Empire February 2022: Cover 2
Skip to the end of the images gallery 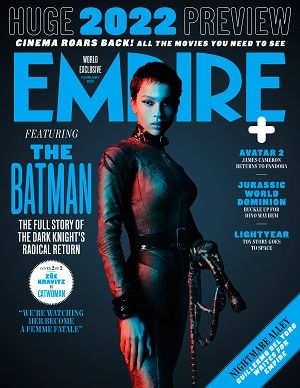