What do you know about the Multiverse? So far in the MCU, the likes of Loki, What If…? and WandaVision have chipped away at the boundaries of Marvel’s established universe, hinting at other realities just out of reach, before Spider-Man: No Way Home started truly tearing down the walls between them. But we haven’t seen anything yet. Now, here comes Doctor Strange In The Multiverse Of Madness, kicking the doors in on a dimension-hopping, horror-infused adventure, boasting wild new variants of familiar faces, nightmarish new worlds, and all kinds of cosmic consequences for tinkering with the timeline. Strap in: things are about to get really Strange.

The new issue of Empire takes a world-exclusive dive into the Multiverse Of Madness, speaking to Doctor Strange himself, Benedict Cumberbatch, about Marvel’s next gigantic swing. Plus, we talk to legendary director Sam Raimi, returning to the big-screen superhero genre he helped define with his Spider-Man trilogy, all about what’s brought him back to the movies, and Marvel boss Kevin Feige teases just how mad this Multiverse gets. Then there's Elizabeth Olsen on the return of Scarlet Witch, Rachel McAdams on her completely different Christine, Benedict Wong on the rise and rise of Wong, writer Michael Waldron on making the leap from Loki, and Marvel producer Richie Palmer on the surprises in store. And we have tons of never-before-seen images from the movie – it’s the ultimate inside look at a Marvel adventure that simply cannot be contained in just one reality.

All that, and this month we celebrate 400 issues of Empire with a major celebratory blowout, sharing 400 Hollywood secrets we've learned along the way. Plus, we pay tribute to the late, legendary Ivan Reitman; ride to Valhalla with The Northman; get trippy with Michelle Yeoh on her own multiversal adventure, Everything Everywhere All At Once; and take a brand-new look at Jurassic World Dominion. Doctor Strange! Dinosaurs! Dimensional chaos! What more could you ask for?

Empire May 2022
Skip to the end of the images gallery 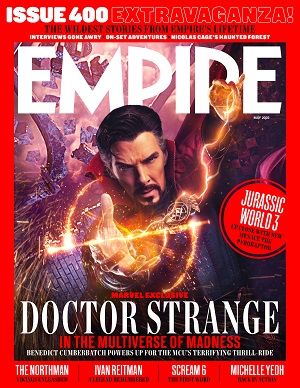