The Marvel Cinematic Universe has long known how to do big – just look at Avengers: Infinity War and Endgame. But with its second streaming series on Disney+, Marvel Studios is about to serve up a different kind of epic: The Falcon And The Winter Soldier, a six-hour all-action superhero thriller, letting Anthony Mackie’s Sam Wilson and Sebastian Stan’s Bucky Barnes loose on a post-Blip Earth. These two former supporting characters are stepping up as buddy-duo leads in a series set to combine the hard-hitting combat of the Captain America movies with the sort of grounded, emotional character work that made WandaVision such a treat – wrestling not just with Daniel Brühl’s returning Zemo, but also with how they’ll continue legacy of their former friend and ally, Steve Rogers.

In the new issue of Empire, we take an exclusive look at the show, catching up with Mackie and Stan – as well as Marvel boss Kevin Feige, co-stars Emily VanCamp and Daniel Brühl, head writer Malcolm Spellman, and director Kari Skogland – to get the inside story on the next chapter of Phase 4. With brand new interviews and never-before-seen images, it’s a major dive into where The Falcon And The Winter Soldier takes Sam and Bucky next, and what sort of world they’re forced to contend with in the wake of Endgame.

Empire May 2021
Skip to the end of the images gallery 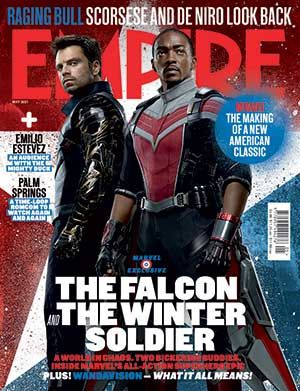