In this issue of Empire:

For a decade, Black Widow has been an integral part of the Marvel Cinematic Universe. Ever since Iron Man 2, Scarlett Johansson’s Natasha Romanoff has been chipping away at that infamous red on her ledger, fighting alongside the Avengers while facing up to her dark, mysterious past – and for 10 years, fans have been clamouring for her to get a solo adventure. Now it’s finally happening – Black Widow is about to kick off Phase 4 of the Marvel Cinematic Universe, a spy thriller that delves into the power and the personal trauma of the deadliest Avenger.

The new issue of Empire goes on set of Black Widow, speaking to Johansson about returning to the role after *that* pivotal Avengers: Endgame moment. Plus, we meet her new teammates Florence Pugh, Rachel Weisz, and David Harbour, and talk to director Cate Shortland about her vision that brought the long-mooted project roaring to life. With exclusive images, brand new interviews and more, it’s the ultimate access to Marvel’s death-defying blockbuster.

Buy your single issue today, or better still, take out a Subscription - Find out more here!

Empire May 2020
Skip to the end of the images gallery 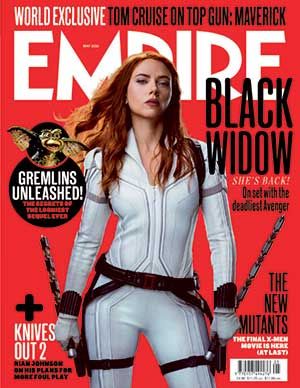