Five decades. That’s how long it’s been since Francis Ford Coppola first gave cinemagoers an offer they couldn’t refuse: a movie masterpiece that’s at once an operatic gangster flick, and also a sweeping exploration of family ties and America itself, bursting with incredible performances, none-more-iconic sequences, and widely considered to be one of the greatest films of all time. It’s fair to say that The Godfather changed everything – and 50 years later, it’s still the Don.

This month’s issue of Empire is a massive brand new celebration of an all-time-classic in honour of its milestone anniversary, taking the ultimate deep dive into a crime-family masterpiece that’s become synonymous with cinema itself. Inside, you’ll find a major new interview with Francis Ford Coppola, revisiting the making of the film, its tumultuous journey to the screen, and exploring what The Godfather means to him all these years later. Plus, we break down the film’s greatest scenes with the people who starred in them – from Talia Shire on the opening wedding, to Robert Duvall on the blood-soaked horse’s head sequence, to James Caan on that bullet-stricken tollbooth massacre. Plus, we revisit the incredible legacy of the late, great John Cazale – aka the actor behind the tragic figure of Fredo – and present rare behind the scenes photos from the film’s production, capturing the making of moments that have long burned their way into cinema history.

Also inside this month’s mag, we break down the seismic impact of Spider-Man: No Way Home, take an exclusive new look at the return of Peaky Blinders, celebrate the incredible career of Denzel Washington, look ahead to this year’s biggest Oscar contenders, and much more. It’s more stuffed with goodness than a cannoli – and looks just as good, with an exclusive cover illustrated for Empire by Paul Shipper. Order your copy today, and remember: it’s not personal. It’s strictly business.

Empire March 2022
Skip to the end of the images gallery 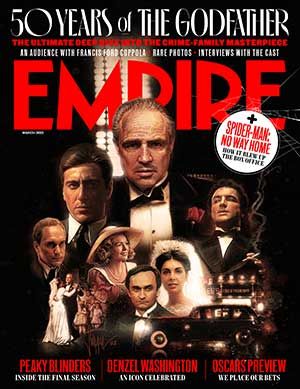