Let us deliver Cover 1 of the Lord of the Rings July 2022 issue direct to your doorstep.

In the wake of the Lord Of The Rings movies, fantasy boomed on screens big and small – but no other fantastical world has had quite the majesty, the literary weight, or the cinematic scope of Middle-earth. J.R.R. Tolkien’s tales of Hobbits, Dark Lords, orcs, elves, goblins, and – of course – magical rings have resulted in some of the most expansive and exciting films of all time, changing the face of Hollywood and bringing the fantasy genre well and truly into the mainstream. Now, The Lord Of The Rings is about to change the game all over again with The Rings Of Power – a streaming series that takes the world you love and brings it back to the screen; just, not quite as you remember. Get ready: a whole new era of Middle-earth is about to unfold.

From September 2, Amazon’s The Lord Of The Rings: The Rings Of Power will conjure up the Second Age of Middle-earth, an era thousands of years before the events of Peter Jackson’s movies – and the new issue of Empire takes a deep dive into the Prime Video series, exploring its epic scale, its many inhabitants, and its multi-year plan to tell a whole new tale in a beloved world. Inside, we speak to showrunners J.D. Payne and Patrick McKay, director J.A. Bayona, producer Ron Ames, and stars including Morfydd Clark, Lenny Henry, Robert Aramayo, Markella Kavenagh, and Benjamin Walker to get the hitherto untold inside story. Plus, the issue is packed with never-before-seen images of the sprawling ensemble cast and new locations – and there are three covers to collect, featuring the elves, the dwarves, and the Harfoots. Your all-access return to Middle-earth starts here.

Pre-order Cover 1 today! Pre-orders will be dispatched on the on-sale date, 9th June 2022.

Empire July 2022: Lord Of The Rings - Cover 1
Skip to the end of the images gallery 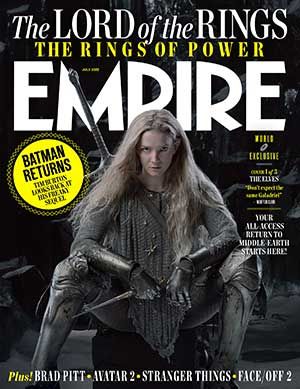