It’s the movie nobody saw coming. Suddenly untethered from Marvel, James Gunn found a new home at Warner Bros in the DC Comics universe, where he pitched a not-quite-sequel, not-quite-reboot to 2016’s Suicide Squad – the anti-hero team-up movie that hit big at the box office, but was also much maligned. And that was only the beginning of the surprises – in the months since, Gunn has revealed a sprawling cast, a roster of who-the-hell-is-that characters, and hinted at a tone pitched somewhere between R-rated gonzo comic book violence and 1970s war movies. Make no mistake: The Suicide Squad is one of the most intriguing, mysterious movies currently in the making.

In a major world exclusive, Gunn’s entire squad features on the explosive cover of Empire’s December 2020 issue – from Margot Robbie’s returning Harley Quinn, to Idris Elba’s newcomer Bloodsport, to a bug-eyed human rodent called Weasel and a sentient shark-man called King Shark. Talk about Squad goals. Inside the magazine, you’ll find the very first images from the film anywhere, as well as behind the scenes pics, and a world-first interview with Gunn himself – talking about the winding road that brought him to DC, how The Suicide Squad helped him rediscover the filmmaker he wanted to be, reconnecting with Marvel, and why his new film will be unlike anything audiences have ever seen before. It’s packed with brand new insights into a movie full of surprises, only in Empire Magazine.

Empire December 2020
Skip to the end of the images gallery 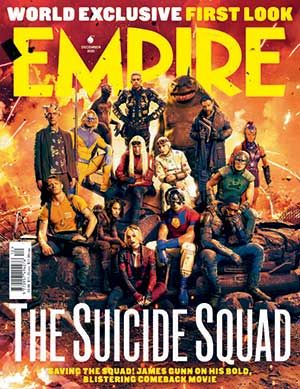