It’s the moment we’ve all been waiting for: cinemas are starting to re-open. In recent months, film venues across the UK and worldwide have – rightly – closed their doors amid the Covid pandemic. But as lockdown measures begin to ease and cinemas implement new safety precautions, the movies are primed for a major comeback. The new issue of Empire is The Big-Screen Preview – your inside look at the most exciting films set to arrive in the second half of 2020 and beyond, packed with never-before-seen images and exclusive interviews.

Inside, we have a brand-new look at the return of James Bond in No Time To Die and catch up with director Cary Joji Fukunaga on what’s in store for 007; Danny McBride and David Gordon Green talk the return of Michael Myers in their ambitious slasher sequel Halloween Kills; Edgar Wright talks up his time-twisting psychological thriller Last Night In Soho; Top Gun: Maverick director Joseph Kosinski opens up on the boundary-pushing sequel; plus more from Spielberg’s West Side Story, Ryan Reynolds’ videogame comedy-actioner Free Guy, Aretha Franklin biopic Respect, the long-awaited Wonder Woman 1984, Marvel’s Black Widow, Pixar’s metaphysical odyssey Soul, and much more.

And that’s not all – also inside this month’s mag we interview actor, visionary, and pioneer Janelle Monáe about her screen roles, the power of genre, and taking the lead in new horror film Antebellum. We look back at horror classic The Omen with the legendary Richard Donner. We revisit the most beloved roles of action icon Michael Biehn – from Kyle Reese and Johnny Ringo to Corporal Hicks – with the man himself. All that, and we get the full story on outrageous action-house Carolco, the production company behind the likes of Rambo, Total Recall and Cliffhanger.

The Big-Screen Preview issue has everything you need to get excited again about the future of film on the big screen, at a time when we’ll all need some long-overdue responsibly-enjoyed escapism.

Empire August 2020
Skip to the end of the images gallery 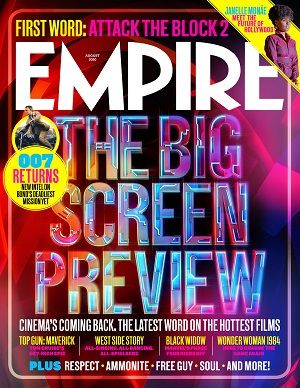