Classic Bike hits a milestone this month – the magazine celebrates its 500th issue by paying tribute to other remarkable 500s. The 500cc motorcycles that define each decade of the 20th century have been selected by CB’s classic experts, with each model described and pictured – right from the Werner Motocyclette of the 1900s, to that ’50s icon the BSA Gold Star DBD34, and on to Suzuki’s real race rep the RG500 Gamma of the ’80s. There’s more 500-related stuff, too, with a look at the fabulously fearsome supercharged 500cc Grand Prix machines that blazed a trail in the pre-World War II horsepower race, as well as three of the bikes that battled it out in the fast-changing world of 1970s 500GPs – the Seeley G50, MV Agusta Tre Cilindri and Suzuki XR05. All this, plus an interview with former 500cc World Motocross Champion Graham Noyce, the tale of two female speedway racers who left the men in their tracks in the ’20s, and more in the September issue of CB.

Order your copy today, or better still, take out a subscription to Classic Bike Magazine. 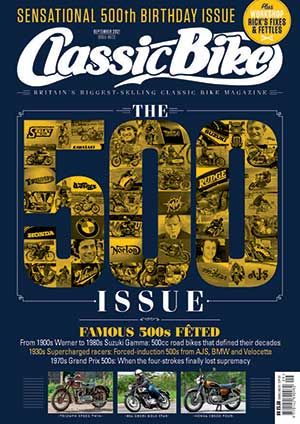 Classic Bike magazine reveals motorcycling's heroic past while also helping you buy, fix and improve the bikes in your shed. Every month it's packed full of real motorbikes you love to own and ride from the 1960's onwards. Every issue is packed full of great bikes, rebuild projects, practical workshop tips, buying advice and fantastic tales of full-noise, high-octane, unfiltered motorcycling. Getting out and about on your classic motorcycle is easy with Classic Bike's regular events listings and resident spannering supremo Rick Parkington provides fixes for all your classic fettling needs. 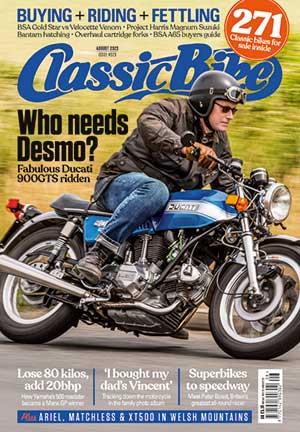 Great magazine. Plenty of interesting articles on the bikes and restoration hints and tips. Good classified section at the back.
- Subscriber